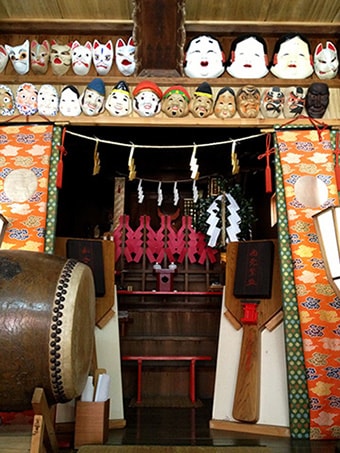 This god has protected peace in the imperial house, the prosperity of Japan, richness in agriculture, safety on seaborne trade, entertainment, success in business and industry, and luck in friendship and household, and has been prayed to by people in Kochi.

Particularly in Showa period, this shrine was called Obiyamachi Inari Shrine and the enshrined gods had protected Obiyamachi market.

As the first All Japan Yosakoi Festival was held in 1999, this shrine, located in the birthplace of Yosakoi Festival which started on the 10th of August, 1954, renamed itself to "Yosakoi Inari Shrine". The enshrined gods started to be prayed to for business prosperity, skill advance of craftsmanship, professional career, and exorcism.

Inside this shrine, there are a pair of 120cm x 50cm x 7cm large narukos (noisemaker used in Yosakoi Festivals) made from 300-year-old Yanase sugi coated by Tosa-Koidaito which is a traditional method of painting as divine bodies of the enshrined gods here. 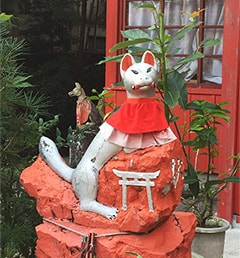 ☆ As everytime the shrine was replaced, from Kyoto to Kochi, Kochi to Obiyamachi, the building had got more and more gorgeous. Since such transformations looked similar to rise of people, this shrine had been believed to bring the worshipers good lucks of their successful career.

☆ When this shrine was located in Yamanouchi's mansion in Kyoto, people prayed to the enshrined gods for their bad-behaving children's better personality. It was also believed that worshpers' descendants are affected too.

☆ Until 1965, a real fox used to inhabit inside the site of this shrine. Because it was rare to see wild foxes in the city of Kochi, and he making his nest under the building of an Inari Shrine seemed spritual, some worshipers used to pray to the fox.