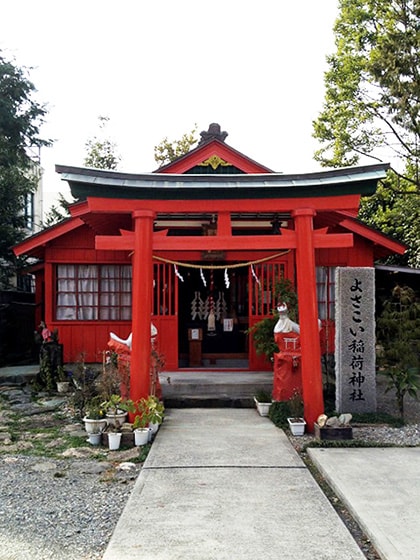 This shrine, which was originally called Tosa-Inari, was located inside of Yamanouchi's territory, who was then the feudal lord of Tosa

After the Meiji restoration, Yamanouchi gave away the estate and the shrine was relocated in Kashibata, Kita-Hohkohjin, Kochi City at the 13th of May, 1878.

Although the building was in the site of Tosa branch of Izumo-Taisha for a while after the relocation, the shintai (object of warship believed to contain the spirit of Gods) was brought to the current location of this shrine at the 24th of April, 1924.

The gods enshrined in this shrine and in Kampei Taisha Inari Shrine are almost the same:

● Ukano-mitamano-kami : a god of thriving business and fortune of money

● Ohmiya-himeno-kami : a goddess of marriage, music, and dance

● Saruta-hikono-kami : a god of traffic safety, exorcism, and entertainment

People have prayed to these 3 gods for many things including peace in the imperial house, the prosperity of Japan, richness in agriculture, safety on seaborne trade, entertainment, success in business and industry, and luck in friendship and household.

In the middle of the Showa period, this shrine was called Obiyamachi-inari Shrine, and the enshrined Gods had protected commerce in Kochi.

Along with these 3 major gods,

● Harutomino-kami : (details unknown) believed to be a local god in Kyoto, of fortune telling, disaster prevention and magic spells

● Haruyoshino-kami : (details unknown) also believed to be a local god in Kyoto, of fortune telling, disaster prevention and magic spells

● Tamatsugino-kami : (details unkown) believed to be a god of relationship of souls and health, and to hand traditions down to posterity

● Iwasakano-kami : originally from Osaka Castle, believed to pray for seaborne safety, strength of the castle and success in stonemason business.

As the first All Japan Yosakoi Festival was held in 1999, this shrine, placed in the birthplace of Yosakoi, began to be commonly called Yosakoi Inari Shrine.

*"God" : In Shinto, there is a concept of "god", which is referred to as "神（kami）" in Japanese. Unlike monothetic religions, "god" in Shinto does not refer to one particular existence. There exist over 8 million "gods" according to the doctrine of Shinto. The word 神 is typically translated as "spirits" or simply "kami", not only "god".